This video of diving with a Dugong in Mati was uploaded to Youtube on Oct 4th 2015 by Roda Novenario, a writer and a PADI-certified rescue diver, who has a blog named “Travel Dive Connect. In this blog she writes about her local travels, Philippine marine biodiversity and conservation, and her social media campaign to promote responsible travel.

Update: The Website and Blog of Roda Novenario “Travel Dive Connect” does not exist any more – here the link to her Facebook site: TravelDiveConnect

I know of places like Boracay and Puerto Galera before their massive commercialization through older friends. They talked about doing road trips in pick-up trucks filled with tanks, dive gear, and eager diving friends to get to a mostly empty Sabang, Puerto Galera. Dives were exploratory. Food and accommodations were simple and cheap. Life was good and nature was at its best.

Of Boracay, I remember a story by an American veteran who settled on the island. He told us how it was truly a paradisial gem, sparkling turquoise. There was hardly anything on the beach. Their mark of progress was broadcasting Voice of America from one of the island’s peaks. 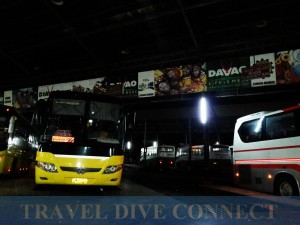 I recall these stories on my first day at Dahican, Mati City. I got there at around 7 in the morning, after an all-nighter on the road. Davao City had 24/7 trips to Mati City. I thought that this was a sign of beach traffic, and ample food and accommodations options.

Instead, I find a Dahican beach that is sparse and simple. Except for the huge I Love Mati eyesore – errrr, sign – which I intentionally left out of all beach pictures, it is exactly how I envisioned Boracay and Puerto Galera before their boom. And I am filled with dread. I can’t get that eyesore out of my head.

Dahican Beach is a sanctuary for turtles and dugongs. It is also a part of the migration routes of whales, whale sharks and dolphins.

The day I arrived, Winston Plaza of Amihan sa Dahican had just secured more than a hundred eggs, left by a nesting turtle the night before. He expected these to hatch in the next few days. Turtles regularly visited the beach to lay their eggs. Winston went on daily patrol, seeking out turtle tracks before foot traffic and waves erased them.

My first two days were spent trying to take videos of a dugong family, a female dugong that swam with its pup and a huge male dugong. From the surface, we’d see them come up for air every five minutes. I got lucky on the morning of my second day, when Winston volunteered to work as a spotter from his paddle board.

The dugongs frequented an area at the west side of the beach, around 30 to 40 feet from the shore. Depth during high tide was around 30 feet. The bottom was sandy, with a few sprouts of sea grass. To reach the area from the beach, you needed to break through 10 to 15 feet of strong waves and murky water. The sea grew calmer after you’ve broken through these waves.

When the habagat came in, the dugongs moved closer to the beach. The day I left, the huge male dugong was seen scouting the area just 20 feet from Amihan sa Dahican’s camp. From June to August, whale sharks also came close to shore. Dahican beach offered food to these marine giants.

Once I’d gotten my dugong video, I settled on the beach. I worked on my tan, “body-surfed,” and whiled away time watching the kids of Amihan sa Dahican show off their skimboarding and surfing skills.

Amihan housed more than 20 scholars, children of varying school levels. These kids were sent to school, and given food and shelter. They also learned the ways of the waves, perfecting their moves every moment they can. They’d competed and won in several local and Asian surfing, skimboarding and canoeing competitions.

Whenever a turtle laid her eggs on the beach, they helped secure the eggs. When I was there, they surrounded the enclosure that sheltered the eggs several times in a day, and watched, fascinated as hatchlings began to make their way out of the sand.

I joined them sometimes, waiting to get handed one or two hatchlings. My hands needed to be covered in sand for the turtles to imprint Dahican (and not ‘D Roda) in their systems.

It was a joy for me, no matter how simple. To handle one of my favorite marine creatures. To watch kids enjoy themselves and appreciate nature. To just lay on the beach, imprinting Dahican into my system.

Much of what Dahican is now owes to the efforts of Jun and Winston Plaza, brothers and founders of Amihan sa Dahican, and their friends, supporters and partners.

Amihan sa Dahican is their advocacy. They want a better life for the residents of Dahican while keeping with sustainable practices, where work, play and home life takes nature into consideration.
It’s been 15 years since they took in their first scholars, giving them education and livelihood opportunities. Some have graduated from college through scholarships at public universities in Mindanao. Jun has worked out agreements with these universities that allot slots for qualified Amihan kids. Some now work as surfing instructors and nature guides, in and out of the country.

Jun has also been successful in affecting change when it comes to business and fishing practices in the area. Through his and the rest of Amihan’s vigilance, local fishermen have adapted sustainable fishing practices. They use smaller nets to save bigger marine creatures from getting trapped. Should they catch an endangered species, such as turtles and rays, most of them opt to release the creatures or turn them over to Amihan.

This change was slow and deliberate. For years, Jun, Winston and friends monitored fishing activities. Whenever there was an illegal catch, they offered rice and food money in exchange for their freedom.

The Amihan team also keeps the beach and its waters clean, doing coastal clean-ups at least once a week. During peak tourist season, Jun and his team would patrol the beach and discourage visitors from bringing food close to the water.

Amihan sa Dahican does all this with minimal support from the local government. They rely mostly on travelers, who rent tents and boards, get surfing lessons and buy from their sari-sari store, for funds to support everything that they’ve set out to do.

The Sign of Impending Boom
Dahican has come a long way. It has been featured in several travel shows as a top skimboarding and surfing destination. Enthusiasts, like myself, have visited for close encounters with dugongs, whale sharks and dolphins. It now has that “I Love Mati” sign, which to me is a misguided attempt at improving the beachscape.

Across I Love Mati is a Department of Tourism (DOT)-supported commercial center that was supposed to launch a week after my stay in Dahican. According to a source, it would house a massage parlor, a few eating and shopping establishments, and an accommodations alternative. (Most places along the beach only offered camping space.)

And while there really is nothing wrong with having options, I dread what might come after.

Amihan sa Dahican only leases its current place on the beach. They need to renew every 2 years. They’ve been threatened with eviction in the past. There have been times when turtles swam back, unable to nest, because of excessive light and noise from partying and karaoke-drunk visitors. Massive tourist traffic during peak season has consistently left massive amounts of trash.

A boom can aggravate problems that Amihan sa Dahican already deals with. Trash, disturbed nesting turtles, lease issues – Amihan is a small team facing what could be a gigantic wave of commercialization.

I hope that in 5 years, I will find a Dahican that’s close to how I found it weeks ago. Simple and fun. Thriving and sustainable. Amihan sa Dahican is my base/camp. I could swim with dugongs and turtles when I want to. I could lay peacefully on the beach during lazy days. I could watch baby turtles take their first steps. Children of all ages play and learn in a sanctuary they share with the rest of God’s creatures.